Broadway — population of roughly 3,500 — is located about 15 minutes north of Harrisonburg on Route 42, which, like Bridgewater, turns into Main Street. There are locally owned shops and businesses along Main Street and a whole plethora of housing options available. Some of the most notable subdivisions in the Broadway area are Legion Hills, Rustic Knolls, and Heritage Hills. Broadway High School is home of the Gobblers! Lets take a look at the home sales and statistics for Broadway for the past few years. How are home values holding up?

Before diving into the details, a disclaimer: the HRAR MLS doesn’t have the ability to run a search strictly within town limits. Therefore, the data below includes all residential properties with a Broadway mailing address. 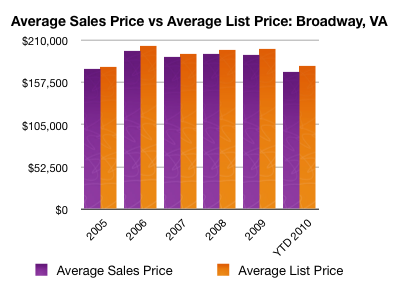 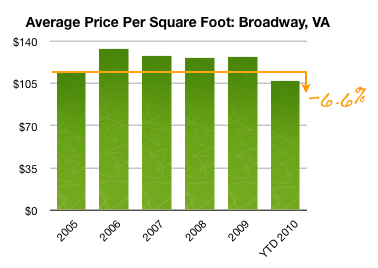 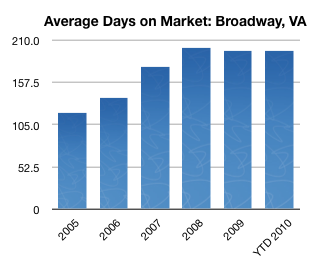 If the chart above were a sales chart, we’d be ecstatic! However, it is graphing the average days on market for Broadway. Since 2005, average days on market for homes in Broadway have increased from 120 days to 198 days, or 65.0%. This isn’t too surprising, though, because it is a good indicator of how the market has slowed down in the past five years. 2005 was a record year in the real estate industry, so of course days on market would increase after that. The good news is that this statistic has been holding steady for the past three years, and has not increased any further. Again, for comparison, homes in Bridgewater stay on the market for an average of 173 days in 2010 YTD, and for 154 days in Dayton.

Overall, things are not dire in the Broadway market, but they aren’t ideal either. Home values have dropped some in the past five years, but things could be a lot worse. Homes are also taking longer to sell now than they were just three years ago, but perhaps things will improve throughout the next year. Only time will tell. Prices have continued to stay fairly strong, which is a good sign for this market!