Bicycling Resources and Events In and Around Harrisonburg

Autumn is officially here, and we are blessed to live in the Shenandoah Valley, where the vibrant colors pop along the mountains and the temperatures drop to a cool 50 – 60 degrees, with an occasional warm afternoon. The local real estate market typically dips during the fall months in terms of sales, and September has proven once again that sales drop during this time of year. The life of a purchase contract is normally around 2-3 months, so a few months ago, buyers removed themselves from their home search… probably to go on a summer vacation or to get ready for the upcoming school year. However, contracts this month have soared, so this tells us that buyers are back!

Though sales in September dropped over 27% from August of this year, sales year-over-year have increased by 6.3%. Prices and home sizes have also risen, and home values remain steady at just over $100 per square foot. Homes are sitting on the market for 10 days longer on average this year over last year, as well.

Above is a look at how sales have trended over the past 12 months. Because we’ve seen an increase in contracts over the past few months, we expect to see good sales numbers over the course of the rest of the year. Not all contracts convert to actual sales, but most do.

Another good month for contracts this year! September adds 97 contracts to the year’s total to 753, which is an 11.2% increase over this same time last year. Prices are currently stable, as is days on market. This bodes well for the rest of the year!

Contracts over the past year have proven quite strong, and this month was no exception. Throughout the spring and summer, our local market normally sees an increase in contracts, but so far this fall, we’ve seen a steady stream of buyers, too.

Taking one last look at contracts, above you can see the number of contracts written each month since January 2009. September was one of the strongest months for contracts over the past three years, and far exceeds the previous three Septembers! 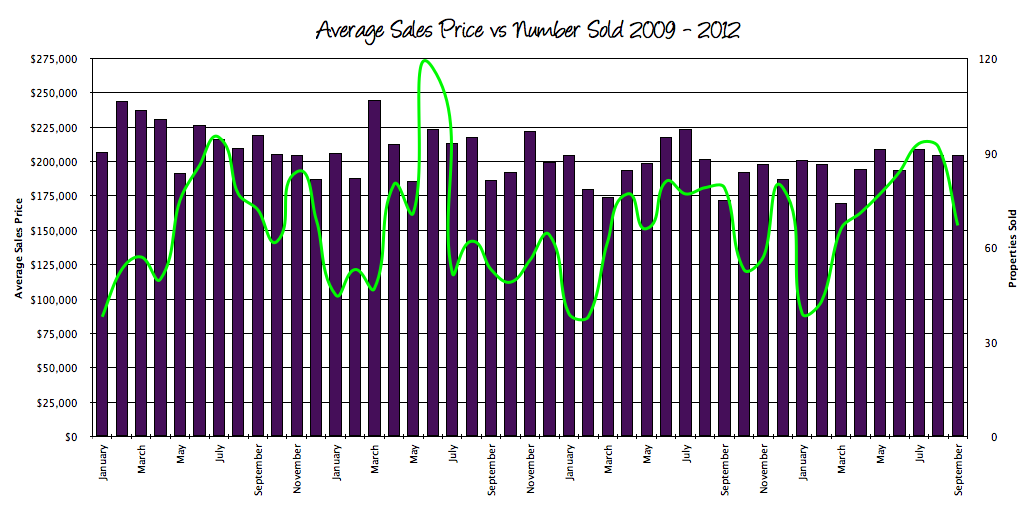 Finally, lets take a look at sales versus contracts over the past year. Notice in July we saw a dip in contracts? This explains the dip in sales for September (because the life of a contract typically lasts about two months). In both August and September, we’ve seen an increase in contracts, so we expect to see an increase in sales over the next couple months, too.

Overall, September was a steady month for the Harrisonburg real estate market, and we look forward to seeing the positive trends to come through the end of this calendar year.

Stay tuned for more market trends and our next Market Report… right here on Harrisonblog!